The Latest Self Cleaning Litter Box – Is It Any Good? Find Out In This Review

For cat lovers who are tired of cleaning the litter tray every day, this might be the answer to your problems.

The Circle Zero is a robotic cat litter tray that scoops the poop for you so you only have to empty the bin once a week!

Sounds great right? But, not so fast, it does come with a fairly lengthy list of issues along with the benefits.

In Circle Zero Litter Box review below, we will cover both the good and the bad of this product so far.

Before you carry on,

They don’t come cheap so it is a investment

Head over to read my in-depth review of Litter Robot > Litter Robot 3 Review  to check out why cat parents love the litter robot!

Anyways, let’s look at what the Circle Zero Litter Box is all about

What Is The Circle Zero Litter Box?

It is a pretty cool robotic litter tray.

It certainly looks cool in the photos.

The cat uses it as normal.

However, it has sensors in it, so 7 minutes after the cat leaves the automatic scooper comes along and rakes out any clumps of litter and deposits them in the bin attached.

It is all enclosed so that the odor doesn’t escape.

It can be used with most regular clumping litter and it comes with two different scoop devices to match the litter being raked up.

It is also said to be super quiet which is pretty cool because last thing you want is to have the litter box cleaning itself at night making loud noises!

If you have only one cat, you should only have to clean the litter once a week.

What Problem Does It Solve?

Most cat owners would agree that cleaning out a stinky litter tray, daily or several times a day is probably the worst part of having a cat.

It stinks up the house almost instantly.

Some fussy cats (which most cats are) may even protest when you haven’t cleaned the litter tray fast enough by going somewhere else.

Maybe beside the tray, maybe in your pot plant – who knows.

But it’s not a nice feeling when you see cat poo in the corner of your house!

So a robotic litter tray that means there is a limited smell and you don’t have to clean every day is an incredible idea.

It would be well worth the investment for many cat parents to have that kind of convenience.

What the Reviews Say

So, enough about what Circle Zero is.

The real question is, does it really work and deliver on the promise of never having to clean the cat litter ever again?

Let’s see what the reviews so far have to say.

After sifting through quite a few reviews from people who have actually received the product and are using it, some say they love it.

Their cats took a little time to hop in and try it, but once they were used to the new robotic toilet, they loved it too.

A few even mentioned that it does in fact help with the odor and they are enjoying not having to clean the litter every day.

For the ones that it is working well for, it seems to be delivering as promised to scoop the litter for them and reduce odor.

A few of the positive reviews discuss needing to make sure to use only a small amount of litter so the scoop can function, re-adjusting parts to make sure they are in place properly to ensure smooth movement, and using clear litter bags so it doesn’t interfere with the sensors.

So, it could be that the design is a bit sensitive still and when the users have got the right mix of factors – it works smoothly.

To be honest, though, it was a bit more work to find positive reviews.

Maybe because it is such a new product – maybe not, it’s hard to say exclusively in the early stages.

Just with every product, there’s the good and the bad

Let’s look at the not so good things

Oh, Unfortunately,there are a lot of bad reviews. A lot.

However, many of these are not so much about the product, but the delivery times or customer service.

Now, I am not saying that is any better, but it seems helpful to talk about how the product itself works for a product review.

The customer experience is also very important but we look at that separately.

Brace yourselves, it is not overly reassuring if you have been thinking of buying a Circle Zero Litter Box

First off, many reviewers were part of the crowdfunding option and there were many complaints about wait times.

Many, many – if not almost all, mentioned very long wait times.

A lot of people have waited months for delivery.

A delayed wait time might be somewhat expected for a crowdfunded option.

However, they also reported a lack of communication about the often very long wait times so it is hard to say.

It seems among the reviewers, some received the product while others who may have ordered earlier, had not.

Understandably, this has caused a lot of frustration.

Many were eagerly anticipating this product’s arrival to solve their poop-scooping daily dilemma.

So to wait months with no communication has left a very bitter taste.

Perhaps delivery delays could have been explained in part by the coronavirus restrictions or as part of the crowdfunding process but, alas, no clear explanation or response to these complaints can be found.

So, at this stage, it can only be speculation as to why there have been such large delays.

Several reviewers write this off to be a scam and seem to have given up hope of ever receiving a delivery.

Okay, so in conjunction with delays for delivery was an overwhelming amount of frustration that they did not receive a reply when they attempted to complain.

Many simply wanted a refund because it had taken so long to arrive and after seeing some reviews, they just wanted their money back.

Additionally, plenty had issues with the machine itself once it had arrived and were looking for somewhere to get support, or to ask about the warranty.

So, if the online reviews are anything to go by, it appears that there is a serious lack in the customer support aspect of the business at this stage. The complaints have gone unanswered.

It may be a fairly new business, however, a total lack of response to genuine questions and complaints has only fueled the fire.

Unfortunately, it seems that the majority of product reviews are negative.

There are definitely some positive reviews, one even suggesting they weren’t sure what the rest of the reviewers were doing wrong because theirs was working beautifully.

Yet, so many of the reviews commented that the product didn’t work shortly after using it.

One said the motor burnt out, while others complained about the sensors, the scoop not working or the flap on the bin not closing properly 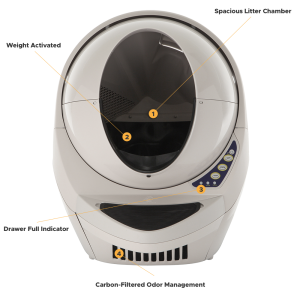 It has the edge over Circle Zero

Circle Zero is still new to the market, but from what the reviews say, it does not seem like something you want to spend money on

Litter Robot 3 has a rating of

Backed with an 18 month warranty it gives you a piece of mind knowing if anything goes wrong, you can get it fixed for free

There is no raking scoop

Don’t worry – If your cat enters the globe when it’s rotating, the litter robot will stop immediately

It’s safe for your furbaby

Slightly expensive but hey, you get what you pay for right?

They have a special offer going on – $25 OFF your purchase

How long will this offer last? – No idea so you might want to act quick!

>>Click Here To See If The Offer Is Still On<<

Here’s a video showing you how the Litter Robot works

So they do get back to you

I guess because of the pandemic it’s hard to get hold of any customer support team!

All in all, what it promises is very appealing.

Every cat parent would love to never scoop litter again.

For the few users that have a working product, they seem to really love it and it delivers as promised.

However, at this early stage of the product’s life, it seems to still have many functionality issues being reported.

You can imagine how disappointing it would be to get one of these, but it doesn’t work.

The extended delivery times are annoying but could maybe be explained by the crowdfunding aspect or even global changes – if there was any explanation given.

Yet – the total lack of communication is what seems to really be hurting this business as it is the main pain point for reviewers.

I would recommend the Litter Robot 3 – It’s well known, trusted and the ratings are awesome!

But it is your choice for you to make

Scroll back to top